So, what’s my solution I wondered? If it’s not the howling dog, it’s noisy teens or couples scrapping! And the walls are by no means wafer thin, and we do have parquet floors and the occasional throw rugs. Since I’m on the 4th floor overlooking the park, I don’t like to blank out the view too much, so my large windows have motorized woven bamboo blinds in all rooms ‘except my bathrooms and bedrooms. I have in bedrooms horizontal Shangri-La shades. My bathrooms have faux wood blinds. Since my window spaces are pretty large, I figure that if I use sound nullifying window shades, I will get some respite from the boisterous neighbors. Living in apartments and condos can be a challenge at the best of times. Man is a social animal blah, blah, blah, but really, it’s often difficult to be civil with neighbors, especially those who don’t care a fig about disturbing others! Imagine living in a somewhat upscale set of apartments, you’d think that money buys a lot of comforts, right? Na uh huh, you’re so not of this world if you think so! Picture this – you’ve come home late in the evening, after having been on the road/traveling for the better part of two weeks – you’ve just had a hot shower, a nice, hot, cholesterol-filled pizza and chilled Dr. Peppers awaits while you get under your favorite, toasty warm quilt and just generally space out in front of the TV watching the recorded episodes of ‘Homeland’ or ‘Gray’s Anatomy’ that you’ve missed – ah, what a life!! But no! The neighbor above me has this bloodhound that yowls mournfully all night long – man! How much can I turn up the TV? There goes the peaceful, relaxed evening I’d been dreaming of for the last four days!

The sound is heard when it travels through the air in the form of sound waves. When sound waves hit a solid surface, they are partially absorbed, but the vibrations set off in the solid structure transmits the sound waves to the other side of the structure, continuing on in their merry trajectory. Putting up barriers with good sound absorption qualities can help reduce the intensity with which the sound waves carry on.

Of course, nothing will really cut down 100% of the noise, short of sound-proofing the entire apartment, and I don’t want to live in a cocoon. Having spoken to some interior consultants and building contractors has given me some ideas about what I could do.

Internal Wooden Window Shutters are a fabulous window treatment option for both aesthetic values (which is important for the house-proud!) and insulation values – thermal and acoustic. Shutters have intricately crafted vanes that can be controlled to manage light and view within a room, and when closed completely, can effectively dampen loud noises; they can be fitted with the confines of a window frame, lending warmth, beauty and classy elegance to an interior, be it contemporary or traditional. Because they’re built to sit flush against the window frames, there are no gaps that allow sound waves to escape through. The view outside, which is imperative to those who have opted for buildings with large windows, can be maintained with the adjustable vanes of this incredible product. And better still, manufacturers have found a way to enable wooden shutters or plantation shutters with motorized vanes for user convenience, so they can now be timed to open and close whenever required.

The extremely modern Cellular or Honeycomb Shades built to optimize energy consumption are an option worth considering. Cellular shades are made of multiple layers of synthetic fabric that opens out into hexagonal tubular cells that trap air that provides insulation. They come in single and double cell layers, which are sometimes coated with  Metalized Mylar. Some would be coated with an additional another layer of fabric to cover the Metalized Mylar layer to block light and further improve insulation like Crystal Pleat Cocoon double cell Blackout Cellular Shades. The shades with cells that have this coating are called ‘blackout shades’ that blocks 100% of the sunlight from a window – they are provided with side tracks that dismiss any light seeping around the edges of a window frame. Also, the more the layer of cells, the more the insulation provided, thermally and acoustically. The sound is substantially cut off as the cellular layers block the transition of waves by absorbing them within. Cool stuff! In addition to regular lift controls, they also come in the TDBU (Top-Down, Bottom-up) automated option with light sensors and a timer, for both energy efficiency and ease of use.

I’ve decided on the latter option, the Honeycomb shades, in deference to cutting-edge technology, and though plantation shutters do have endless benefits of their own, they are expensive and just don’t fit within my budget considerations at the moment. Besides, I do have better sound 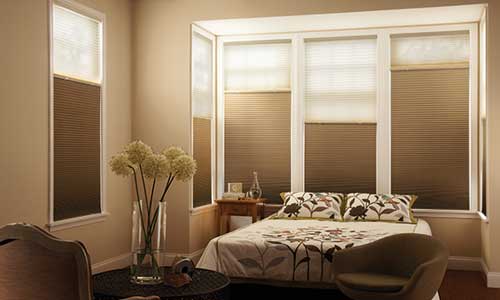 insulation since I opted for double layered, blackout honeycomb shades that are installed with sidetracks that further muffle ambient noise. I also have the TDBU option, just as I did with my bamboo shades (which I do miss as they had a beautiful charm of their own), so I can let the tops of the shades down at most times during the day that gives me a view of the treetops and skyline that’s to die for! And to top it all, I bought them online from Zebrablinds – Graber’s Crystal Pleat Blackout Cellular Shades at a 60% discount, with the automation costing me only 168 dollars! Free shipping! Different colors for different rooms! No more deafening noises! So I can enjoy a sitcom in peace, after a long, hard day at work! I love you, Marysville!